In every city, Moscow isn’t an exception, there are places to see, and there are places to feel. The second option means a place you can feel through; you can touch, smell, take photos of, eat there, dance, whatever, in other words, travel with 5D effect. Moscow streets are such spaces that you can make your own depending on the activities you do or emotions you express or shops or cafes you visit. Choose a street you like and make it special for yourself. Next, you may find yourself standing right in front of one of the Moscow museums that you may decide to spontaneously get in. The street that you will never confuse with any other Moscow streets. Being 1,6km long, it starts in the heart of Moscow – the Red Square and the Kremlin – and ends on Triumphalnaya Square. What is hidden from our eyes – it is Savvinskoye Podvorye. It functioned as the profitable house ( for tenancy) by the Savvinskiy Monastery. In the 1930s the House was planned to demolish, but finally, it was saved by moving it deeper. Because of this fact it’s known that the house weighted 24 tonnes. Another surprising fact about Tverskaya street is that it was much smaller in comparison to modern days. In the 17th century it was just 8-15m wide, in the 18th century, a minimal width for streets reached 20m. After the 1930s by demolishing houses along the street was widened to 40m. As a result, four huge buildings (including Savvinskoye Podvorye) were moved to their new places.

Now a bit pathos, with massive buildings, myriads of lamps, Tverskaya street is like the architectural encyclopedia, for it witnessed everything. The first tram on the street, the first asphalt, the first 99 lamps, and the reconstruction project by Dutch buro West 8. It’s the street with no churches, but hotels, shops, and bars. Don’t miss the National Hotel, the Ritz-Carlton Hotel, Eliseevskiy shop.

Since Kamergersky lane is perpendicular to Tverskaya street, it’s the most possible route locals and travelers choose when strolling around Moscow. Rather than moving further to Pushkinskaya Ploschad or other Moscow streets, it seems like Kamergersky lane magnetizes with its quite busy but carefree vibes. As a result, you will see there those, who are hurrying to their workplace and also those, who are hurrying to the new sneakers drop. Along the lane you will find a range of cafes and bars, for example, Upside Down Cafe or Chaikhona, or Varenichnaya, and among these eateries, you can notice Moscow Art Theatre ( in Russian ‘МХТ’). Furthermore, you can explore architecture more deeply. In the past in Kamergersky lane lived and worked with such significant Russians as writer Leo Tolstoy, novelist Mikhail Sholokhov, artist Vasily Tropinin, composer Sergei Prokofiev.

In conclusion, don’t forget your map to explore Moscow streets, walk, enjoy, and find the building or cafe that you will like most! Arbat stretches from Arbatskiye vorota to Smolenskaya ploschad. First of all, while walking through the buskers, street artists, and souvenirs stalls, you can feel yourself as a 100%-tourist. However, in the 18th and 19th centuries, it was a calm place where nobility and Russian eminent families such as Rastopchiny, Dolgoruky, Tolstye, Golytsyny lived. In modern Stariy Arbat street, you will find sites from all periods of Moscow history – it can be the museum-apartments of Pushkin and Tsvetayeva (great Russian poet of the XXth century), Vakhtang Theater, or Hard Rock Cafe. Moreover, it’s difficult to imagine that during 1930-1950s Stalin used Arbat as the main road to the Kremlin. What is more to see in the Arbat street, is a wall painted all in graffiti, dedicated to Viktor Tsoi, rock-musician in the Soviet period, who was an idol for many Russians of those times. The history of the street dated back to 15th century, blacksmiths and stablemen lived there at that time. As for the street name, it was given due to the bridge ( in Russian bridge means ‘most’) over the Neglinnaya River. In the period from 18th century to 1917 Kuznetskiy most street was a major ‘shopping’ street with best clothes, bookstores, and restaurants. Now you won’t find a bridge there but you will find some stores and restaurants. For instance, Vogue Cafe, cafes in TSUM, More Grill, and Zara, Massimo Dutti, Nike, House of World Literature. Moreover, when you start your walk from TSUM, you will go a bit upwards, so it’s nice to get fit while walking.

Ostozhenka starts from Prechistenskie vorota and then leads to Krymskaya Ploschad. Walking along the street gives you pleasing relaxation feeling. Most noteworthy, it’s not overcrowded with tourists but it magnetizes with its simplicity, beauty and rich history. It’s one of the oldest streets in Moscow. Could you imagine that In the past it was a part of the route between Kievan Rus’ and Vladimirsko-Suzdalskaya Rus’ in the 12th or 13th century, and now you can dine in Genotsvali or Tiflisskiy dvorik restaurants or visit Documentary Film Center, where you can watch movies in the original language. 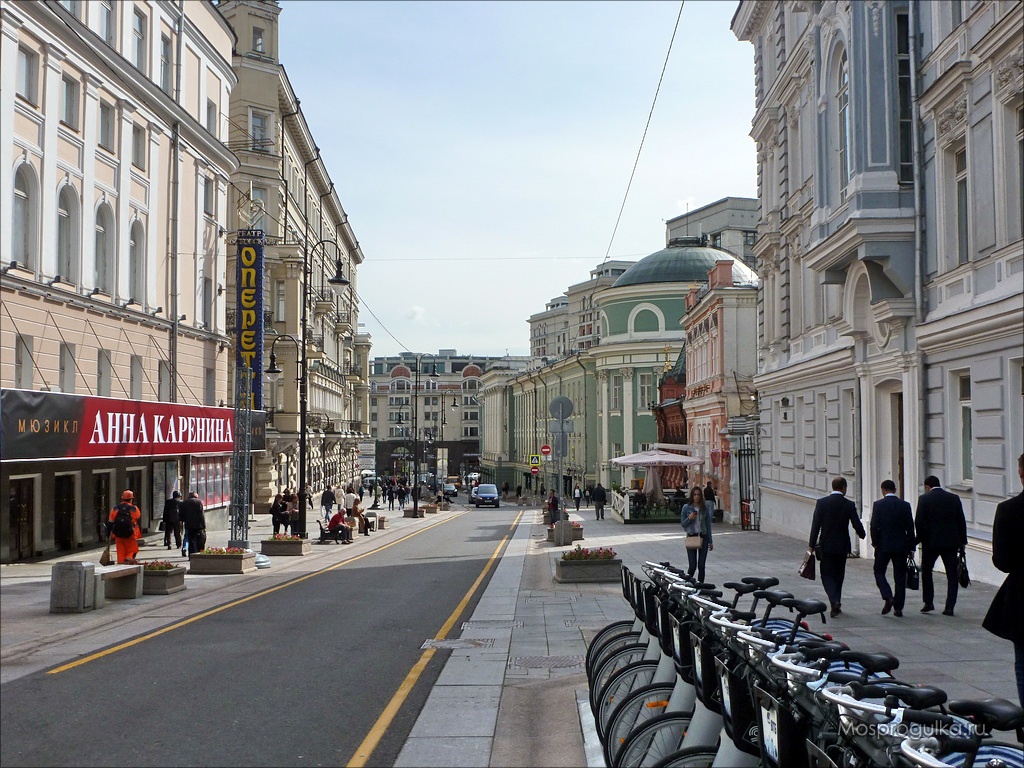 In the 14th century, Bolshaya Dmitrovka street was a part of the famous trade road that led to Dmitrov town ( now Dmitrov is a town in Moscow region). In 1812 Moscow fire it was almost the only street that wasn’t severely damaged. Some houses that you see now were built in 18th and 19th centuries and belonged to nobility. Nevertheless, nowadays you can notice soviet architecture -the Russian State Archive of Socio-Political History (RGASPI). If you want just to stroll around, it’s a perfect place filled with restaurants, bars followed by a great atmosphere, lights, and facades. Take a nice journey walking or riding a bike along the street.

This street confidently has the status of ‘food street’. Starting from Serpukhovskaya ploschad, it stretches to the Chugunny Bridge over Obvodnoy Channel and Kadashyovskaya embankment. When it’s warm you can walk to the Red Square and Zaryadye park or take the bus M5.

In the past, the place, where the Pyatnitskaya street is now, was densely covered with forests. It was the part of the road that led to the South – Ryazan, Tula, Serpukhov. At first, the street had a name ‘Lenivka’, later it gained the contemporary name, and even in the Soviet times, it wasn’t changed.

The street took the name of the Paraskeva Pyatnitsa Church, that was demolished in 1934. Paraskeva was a patron of all travelers. Now in its place, the lobby of Novokuznetskaya metro station is located.

Surprisingly not overcrowded street near the Red Square appeals to the locals and travelers with its calmness and elegance. One of the most ancient streets is located on the territory of Kitay-Gorod. In the 17th century Varvarka had the status of the richest street in Moscow, then Tverskaya won its status. In fact, traveling along Varvarka feels like visiting an architectural museum. You travel in time. You can suddenly find yourself in the 15th century, or in the 17th, or again in the 21st century. Lots of ancients churches, trade rows, the Old Merchant Court, Old English Court, the Monastery of the Sign, the Palace of the Romanov Boyars – everything traces the history and greatness of the country. Russian artist Apolinariy Vasnetsov depicted the street in his artworks.

Today Varvarka is becoming busier because the route from Kitay-Gorod metro station to Zaryadye park goes through the street. You can also take the hop-on hop-off-bus, which will take you along the street. In general, it’s the easiest way to approach the Red Square, if you prefer leisurely promenade.

Nikolskaya street is parallel to Varvarka. After visiting Zaryadye park, or the Red Square, a magnificent view on Nikolskaya street opens when you go through the GUM. It’s narrow, long, and is always lavishly decorated with lights over the heads of tourists and locals. The decoration differs according to the national holidays, festivals, and season.

Nikolskaya street is one of the arteries of Kitay-Gorod. Historically it goes from the Nikolskye Vorota (‘gates’) of the Kremlin to the Nikolskye Vorota, and then Vladimirskiye Vorota and ends in the Lubyanskaya ploschad. In the past, the street was a part of Vladimir road, which led to Rostov Velikiy, Suzdal, and Vladimir. There two opinions on the place that gave the street the name Nikolskaya. It was the Nikolskaya Tower of the Kremlin where the street started or the Monastery of Nikola Staroy. Many centuries ago boyar estates and courtyards grew along the street. To live in Nikolskaya street became prestigious.

Now walking along the street, you observe its famous monasteries, former trading rows, and estates of the Sheremetyevy, Romanovy, Dolgoruky, Telyatevskiye. Nikolskaya was also the major place for selling icons and books. It was also the center of education and enlightenment, as the Printing House was located there.

BEAR IN MIND THESE FEW TIPS

Keep your time for Nikolskaya street, observe the architecture, buy Russian hat ’shapka-ushanka’, and have dinner in one of two restaurants- Farsh or Riby Net (means ‘There is no fish’), belonging to Russian significant restaurateur Arkadiy Novikov.